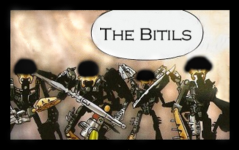 Bitil was later killed when he spat into his microphone and it blew his head off.
The Beatles then sued him for absolutely no reason. In this lawsuit they got his afro wig. They then started a facebook group called '5,000,000 strong for Obama to grow an afro'

Retrieved from "https://unbionicle.fandom.com/wiki/Bitil?oldid=4654"
Community content is available under CC-BY-SA unless otherwise noted.