"Al Gore!?!? Where the Heck did you get my cell number!?!?"
—Turaga Dume on the phone with Al Gore 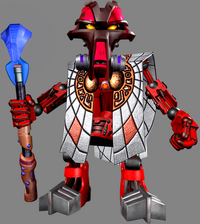 Dume was once a Toa until he got too old. He now leads the city of Metru-Nui and forced the Matoran to work innfactories. He was constantly receaving calls on his cell from Al Gore saying "Stop killing your island!"
Dume created an army of the Matoran and was going to use them to get him to shut up. However, he has recently changed his mind and is now targeting Mcdonalds so he can stuff his face with all the free vegetarian big macs he can fit in his mouth! He was later eaten by the Matoran Nui after it ate the Vahki.

Retrieved from "https://unbionicle.fandom.com/wiki/Dume?oldid=5384"
Community content is available under CC-BY-SA unless otherwise noted.