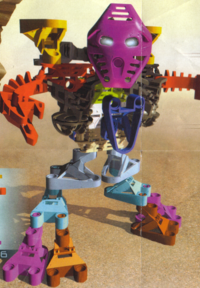 The Matoran Nui after eating Dume.

The Matoran Nui was a cannibal. It once ate Takanuva and then he farted, puking from the gas. Takanuva then cussed at it and banned him from watching TV on the night of grays anatomy. He then tried to eat Takanuva again. Takanuva knocked his mask off and he shrank . Takanuva then stepped on it and ate it like Ermac. It died somewhere in Takanuva's intestines from some pizza hut he had later that night flushing and flooding his stomach.

Retrieved from "https://unbionicle.fandom.com/wiki/Matoran_Nui?oldid=5700"
Community content is available under CC-BY-SA unless otherwise noted.