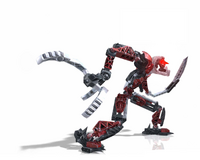 Sidorak was an extremely old guy with an insane British accent, an army of spiders that he somehow managed to gain control over, and a cain that he liked to bully Matoran with.
At one time, he brought his army of spiders to Metru Nui so he could conquer it in the absence of its guardians. When they returned they took an embaressing picture of him in him posing in the mirror. He then begged them to giving it back to him but when they wouldn't he strangely developed a liking for smelling paint. He died when he stuck his head so far down a paint can that it got stuck and he suffacated.

Retrieved from "https://unbionicle.fandom.com/wiki/Sidorak?oldid=4930"
Community content is available under CC-BY-SA unless otherwise noted.